“Welcome to the Fun Home” is one of those songs that stays in my head long after the show has ended. The three Bechdel children, standing in front of an open coffin, perform a joyous advertisement, which they wrote and choreographed, for their father’s funeral parlor. Every line from lyricist Lisa Kron masterfully captures the voice of childhood starting with… “Your uncle died / You’re feeling low / You’ve got to bury your mama / But you don’t know where to go.”

END_OF_DOCUMENT_TOKEN_TO_BE_REPLACED

With his unique staging of Man of La Mancha, director Nick Bowling appears to be on a quest of his own—whether that quest ends honorably or deteriorates into a fool’s errand is up to the individual theatergoer.

Be aware that my reactions were distinctly out of sync with many in the audience, a majority of whom rushed to their feet during the standing ovation.  Other theatergoers on the way out gushed about this new interpretation of a beloved classic.  Bowling appears to have created a crowd pleaser.

END_OF_DOCUMENT_TOKEN_TO_BE_REPLACED

Dedè, the most cautious of the four sister protagonists in Teatro Vista’s The Time of the Butterflies, is haunted by the accusation that she watched through her window and did nothing while her three sisters risked everything to end the dictatorship  of “El Jefe” Trujillo.

Playwright Caridad Suich explores the complexity of Dedè’s character through two actors—Charìn Alvarez playing Dedè as an elderly woman and Riska Carrasco playing the younger Dedè that survived Trujillo’s 31-year reign.  She was left alone to tell the story of her three sisters’ murders (which were among 30,000 deaths of those that opposed Trujillo).

END_OF_DOCUMENT_TOKEN_TO_BE_REPLACED

Being a fan of puppetry, particularly the use of puppetry to push boundaries, I was excited for my third show—the comedy Hand to God.  In fact, Hand to God provided some immediacy for this vacation as it is closing on January 3.

Tyrone—a loud-mouthed, violent, and possibly demonic hand puppet—begins and ends the play with hilarious monologues about the nature of evil (spoiler alert: it’s humans who created evil… not the other way around).  Steven Boyer keeps his hands moving at light speed as Tyrone rants, raves, and attacks both his ventriloquist Jason and the four other characters in this outstanding ensemble cast.

END_OF_DOCUMENT_TOKEN_TO_BE_REPLACED

Frank Galati’s adaptation of John Steinbeck’s East of Eden is a four-character affair.  Yes, the play includes six additional actors performing 10 additional roles, but the spotlight stays focused on the dysfunctional Trask family and their biblical fall from grace.

END_OF_DOCUMENT_TOKEN_TO_BE_REPLACED

Fortunately I am allowed more than six words for “good” when writing about 1984, which returned to Chicago at Steppenwolf’s upstairs theater after an original production at Lookingglass in 2004.  Andrew White’s adaptation begins with characters systematically reworking the dictionary to make less room for originality in thought.  The correct words to describe this production would be “double-plus good” except in this dystopian world reviewing a theater show would be a “thought crime.”

END_OF_DOCUMENT_TOKEN_TO_BE_REPLACED

Every ticket purchased for a Mary Zimmerman play carries the promise of her unique approach to theater, and Lookingglass’s production of Treasure Island (adapted and directed by Zimmerman) is no exception. 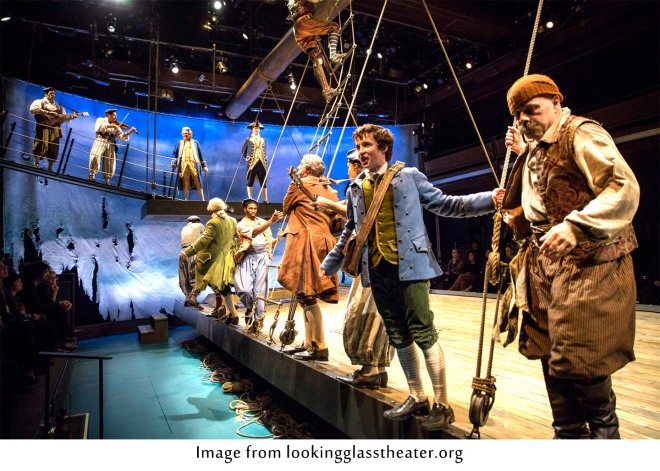 END_OF_DOCUMENT_TOKEN_TO_BE_REPLACED

Peter and the Starcatcher begins exactly where it needs to begin—a world that bears minimal semblance to Peter Pan.  Eleven actors (10 males and one female) stand at the front of a stage made of thick wood planks and dive headfirst into their well-rehearsed exchanges of dialogue and movements.  They drive through the exposition at breakneck speed, explaining that two ships are leaving port from London at the same time carrying identical wood crates.  The wood crates are switched, with the more important crate landing on the slower ship called The Neverland, and thus emerges the first hint of Peter Pan.