At a certain age during childhood, we start to devote a small amount of attention to the media.  This awareness of newspaper headlines and TV soundbites begins before we realize that history is not just Egyptian pyramids or the Civil War or Kevin Arnold in The Wonder Years. 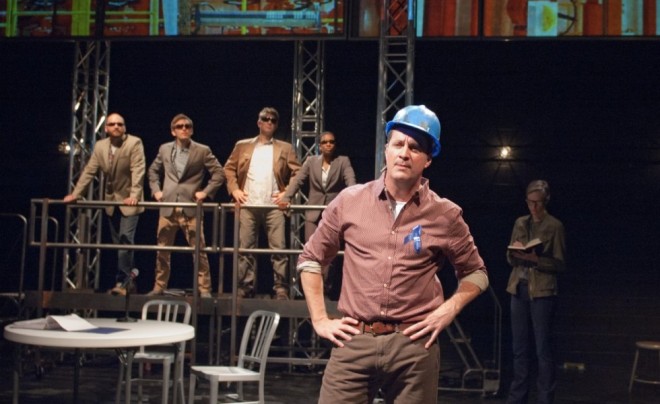 Two historical events remain most prominent among my memories.  The first included a small country called Kuwait that was being invaded by a dictator named Saddam Hussein.  Ribbons hung on trees and Whitney Houston’s rendition of “The Star Spangled Banner” played on the radio.  Some skeptics claimed that Operation Desert Storm was motivated more by oil than by the desire to protect innocent people.

I never connected these comments about oil to an event that occurred 15 months earlier.  In 1989, the newspapers flashed pictures of birds and fish and even sea otters* covered in black ooze.  Joseph Hazelwood became synonymous with drunken negligence.  People with no interest in the ocean learned the difference between single-hulled and double-hulled tankers.  Then one month later, as is often the case with history in the making, the media stopped covering Prince William Sound.

Timeline’s production of Leigh Fondakowski’s Spill focuses on the more recent Deepwater Horizon oil spill, which released 210 million gallons of oil into the Gulf of Mexico.  Fondakowski is best known as the head writer of The Laramie Project, a mesmerizing work that explores the hate crime that took the life of Matthew Shepard.  Spill manages the daunting feat of surpassing both the emotional intensity and cultural significance of Laramie.

Fondakowski’s script is based on over 200 hours of interview material from those closest to the accident including relatives of the 11 killed by the explosion, engineers involved in designing the rigs, and members of the community whose lives are intertwined with the Gulf.  Early interviews, combined with sound effects and creative stage design on a minimalist set, create the world of American offshore drilling.  An inconceivable 14,000 rigs churn in this region.  The Deepwater Horizon, before it sank, was two football fields long and 20 stories high in places—a mechanical city floating above three miles of water 41 miles off the coast.

The nine actors each portray multiple roles with the devotion that accompanies theater that transcends pure entertainment value.  Standouts include Tim Decker as Keith Jones, the father of deceased mud engineer Gordon Jones.  Decker’s monologues explore the pain of losing a son and desire for answers regarding British Petroleum’s role in the disaster—answers that are buried in over one million pages of government testimonies.  Kelli Simpkins switches between three fascinating characters: the narrator recording the stories of those willing to speak to her; Arleen Weise, a hard-working mother whose son Adam was working on the rig “to pay for her retirement”; and Joey Danos, an impoverished “cutthroat” who traded his future health for $300 a day as part of the clean-up effort.

The first act ends with a staging of the disaster in which the actors—armed with one table, some chairs, two metallic platforms, and three mobile lights—switch rapidly between their various roles and yet maintain a fully coherent reenactment.  This scene alone is well worth the price of admission.

The interviews are not a pure indictment of offshore drilling.  Fondakowski explores the scope of an industry that is the economic heart for an entire region of the United States.  The families of the deceased were almost unanimous in their criticism of Obama’s decision to place a six-month moratorium on the region’s offshore drilling, citing both the economic implications on the dependent communities and the pride the region feels in providing alternatives to foreign-bought oil. 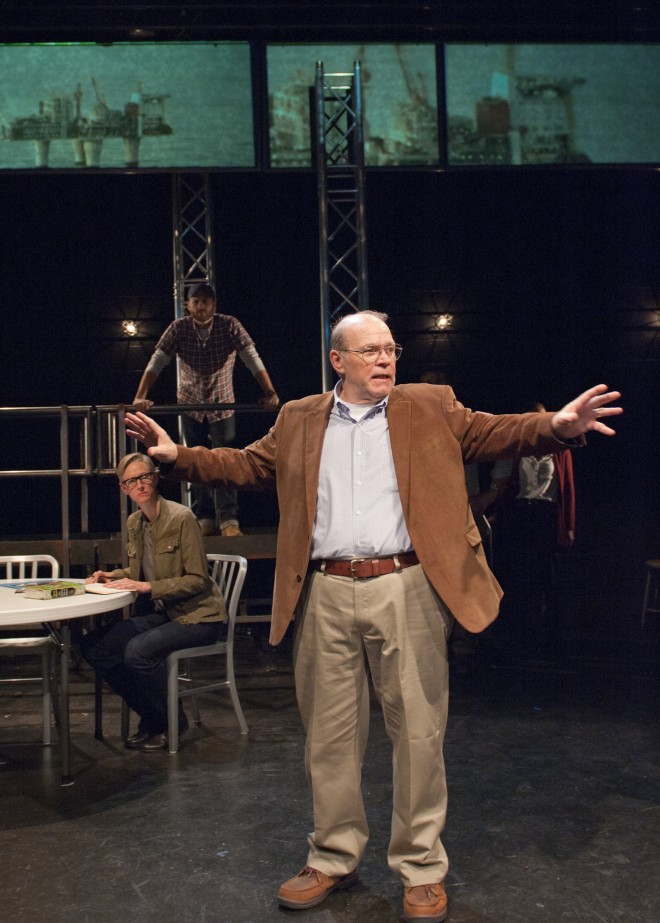 Engineer and former BP Consultant Bob Bea (Craig Spidle) stated, “We are past poking a hole in the ground and watching the oil gush out.”  The main question that resonates through Spill is how the development and operation of these oil rigs (that function at over $500,000 a day) can be more cost effective than developing new technologies based on renewable resources?  The answer: oil drilling isn’t more efficient.  It’s not even close when factoring in the long-term environmental impacts of high stakes drilling.  Tragedies like the Deepwater Horizon, while statistically rare, are inevitable when dealing with such complex mechanisms like oil rigs, and the most terrifying realization is that technology does not exist to deal with disasters that have not yet occurred**.  Spill proves that it is time for the world to commit to transitioning to renewable energy sources.

*Sea otters were my favorite animals at the time of the Prince William Sound spill due to a memorable family trip to the Monterey Bay Aquarium.  A memory from that visit involves my father (a biology teacher) trying to pick up a sting ray out of its petting tank.  The sting ray proceeded to screech and use its wings to splash water on everyone in the vicinity.

**I remember thinking at the time, why can’t they create a big funnel to direct the gushing oil to the surface, where they could pump it into tankers?  After seeing Spill, I am convinced that if that had been a possibility and if it would have cost less than $2.5 billon, BP would have tried it.